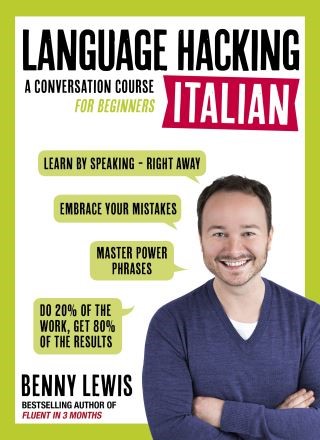 'Benny's new series makes it fun to dare to speak. This could well engage more people with a new language than some of the more traditional language books.' Steve Kaufmann, Lingq
Some people spend years studying Italian before they finally get around to speaking the language.
But here's a better idea. Skip the years of study and jump right to the speaking part. Sound crazy? No, it's language hacking.
Unlike most traditional language courses that try to teach you the rules of Italian, #LanguageHacking shows you how to learn and speak Italian through proven memory techniques, unconventional shortcuts and conversation strategies perfected by one of the world's greatest language learners, Benny Lewis, aka the Irish Polyglot.
Using the language hacks - shortcuts that make learning simple - that Benny mastered while learning his 11 languages and his 'speak from the start' method, you will crack the language code and exponentially increase your language abilities so that you can get fluent faster.
It's not magic. It's not a language gene. It's not something only 'other people' can do. It's about being smart with how you learn, learning what's indispensable, skipping what's not, and using what you've learned to have real conversations in Italian from day one.
The Method
#LanguageHacking takes a modern approach to language learning, blending the power of online social collaboration with traditional methods. It focuses on the conversations that learners need to master right away, rather than presenting language in order of difficulty like most courses. This means that you can have conversations immediately, not after years of study.
Each of the 10 units culminates with a speaking 'mission' that prepares you to use the language you've learned to talk about yourself. Through the language hacker online learner community, you can share your personalized speaking 'missions' with other learners - getting and giving feedback and extending your learning beyond the pages of the book . You don't need to go abroad to learn a language any more.

Great book. I am organizing a journal based on suggestions from his book. I feel way more organized using the helpful hints in the book.